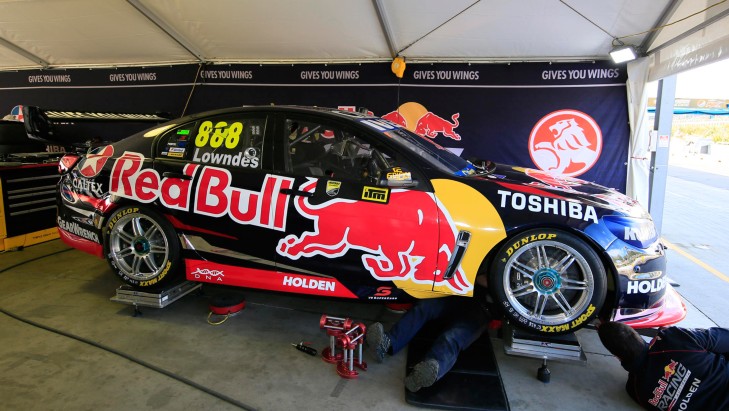 Red Bull Racing Australia finished repairing Craig Lowndes' Commodore at 6am this morning, determined to have the Championship chaser out on-track for today's 150-point race at the ITM 500 Auckland.

Lowndes' left rear tyre exploded on the front straight yesterday while he was leading the second race. His Holden thumped the wall and caused extensive damage to the car.

While he admits it won't be like an all-new V8 Supercar, cosmetically the Commodore looks perfect, and the team will assess it in the 15-minute warm-up session this morning.

Lowndes complimented the crew's efforts, which involved taking the chassis off-site last night, and said they will be racing conservatively today.

"As good as it can be - the cosmetic look is much better than underneath," Lowndes told v8supercars.com.au.

"It left the racetrack, got back just after midnight - it was lucky we could utilise a local panel beater shop in town and help to pull out a lot of the rails and everything else... the rest of the guys did a good job putting it back together.

"I think six o'clock this morning they finished it, so the guys have had minimal sleep but she's all good to go."

Strategy will play a big part in today's race, but Lowndes says he and engineer Grant McPherson will be playing it conservatively and not taking risks, despite chasing a 306-point gap to Championship leader Mark Winterbottom and dropping to third behind Prodrive's David Reynolds.

"We just want to finish the race," Lowndes said.

"Yesterday was pretty poor, really. We were in good shape to have a good result, at the same time take some points out of Frosty, but with the tyre issue it has really put us back.

"Now we've got to try and fight back to second and see what happens after that."

The team was not completely sure what caused the explosion - Lowndes described it as "mystifying" - and says they will be cautious racing on the Dunlop soft tyre, which ran at Pukekohe for the first time yesterday. The mixed tyre format means teams must use a set of soft tyres to their discretion during the 200km race.

"When we first came over here ... we did think about using a soft first, hard and then soft, but after yesterday I don't think that will be feasible or possible. It will most likely be a hard-hard-soft race.

"I think everyone up and down pit lane will now look at that. Everyone used yesterday to have a good look at tyre wear and tyre life, so with our issue it's a matter of now understanding."

Despite starting every event here and having recorded wins at almost every racetrack on the circuit, Lowndes is yet to stand on the top step at Pukekohe and was disappointed not to crack the stat yesterday.

He and the team won't be giving up today, though. 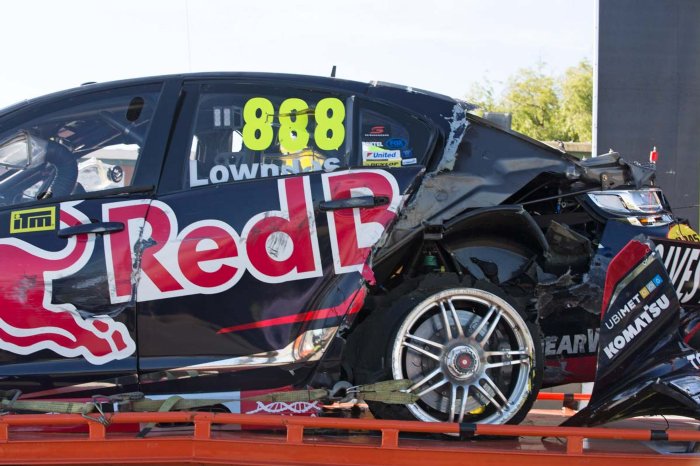 "We've still got to keep pushing - no doubt that with our accident it gave Frosty a little bit of a breather. And for me it was just disappointing. We had such a good car yesterday; we could've actually gotten our milestone win here!

"Look, it is just one of those things, it happens, it's motor racing, but credit to the boys to do what they did to turn the car around.

"As I said cosmetically it looks good, underneath it's a bit rough but I believe going forward this will get pulled apart after the weekend.

"It won't run at Phillip Island - we'll hopefully get it ready for Homebush."

The one positive the team was taking from yesterday's accident was that it happened in the second 75-point race. Today's is worth 150 - double points, effectively.

"At the end of the day we'll get on with racing see what the day brings, score points again for the championship, [go] down to Phillip Island - we know we'll go well there and get out of this weekend the best shape we can."