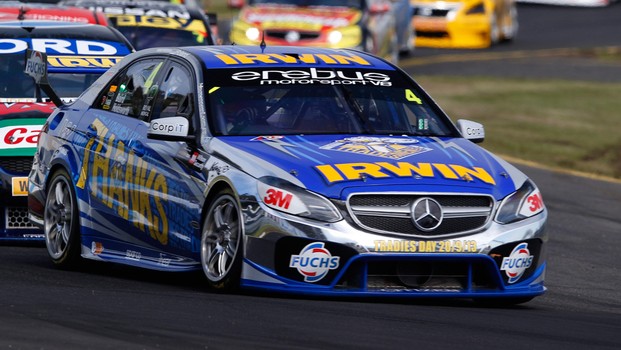 Though this year's V8 Supercars title may be out of reach for Erebus Motorsport V8, drivers Lee Holdsworth and Craig Baird have their eyes focussed firmly on the PIRTEK Enduro Cup.

Backing Holdsworth and Baird was a solid team strategy that, despite longer pitstops due to higher fuel consumption over their rivals, saw them finish just 18.91 seconds behind the winners, Red Bull Racing Australia's Jamie Whincup/Paul Dumbrell after 500 gruelling kilometres.

Holdsworth hounded Pepsi Max Crew FPR's Will Davison all the way to the finish for the final podium spot. Davison's car started to smoke with around 10 laps remaining and Holdsworth backed away as visibility became an issue through to the finish.

The result has surged Baird and Holdsworth’s confidence heading into the biggest motor race in Australian sport, the Supercheap Auto Bathurst 1000 on October 10-13.

“We are now sitting in fourth place for the PIRTEK Enduro Cup with a couple of rounds to go, so it has given me another goal to aim for this year," Holdsworth said.

“I feel our car speed has come at the right time of the year and hopefully that will continue at Bathurst and on the Gold Coast. We’ll be giving it our best shot.”

2013 is the first time in the V8 Supercar era that the three classic endurance events  – the Wilson Security Sandown 500, Supercheap Auto Bathurst 1000 and ARMOR ALL Gold Coast 600 – have been drawn together in a Championship-within-a-Championship, known as the PIRTEK Enduro Cup.

Tickets are still available for Bathurst, which begins Thursday October 10, and for the ARMOR ALL Gold Coast 600, running from October 25 to 27.