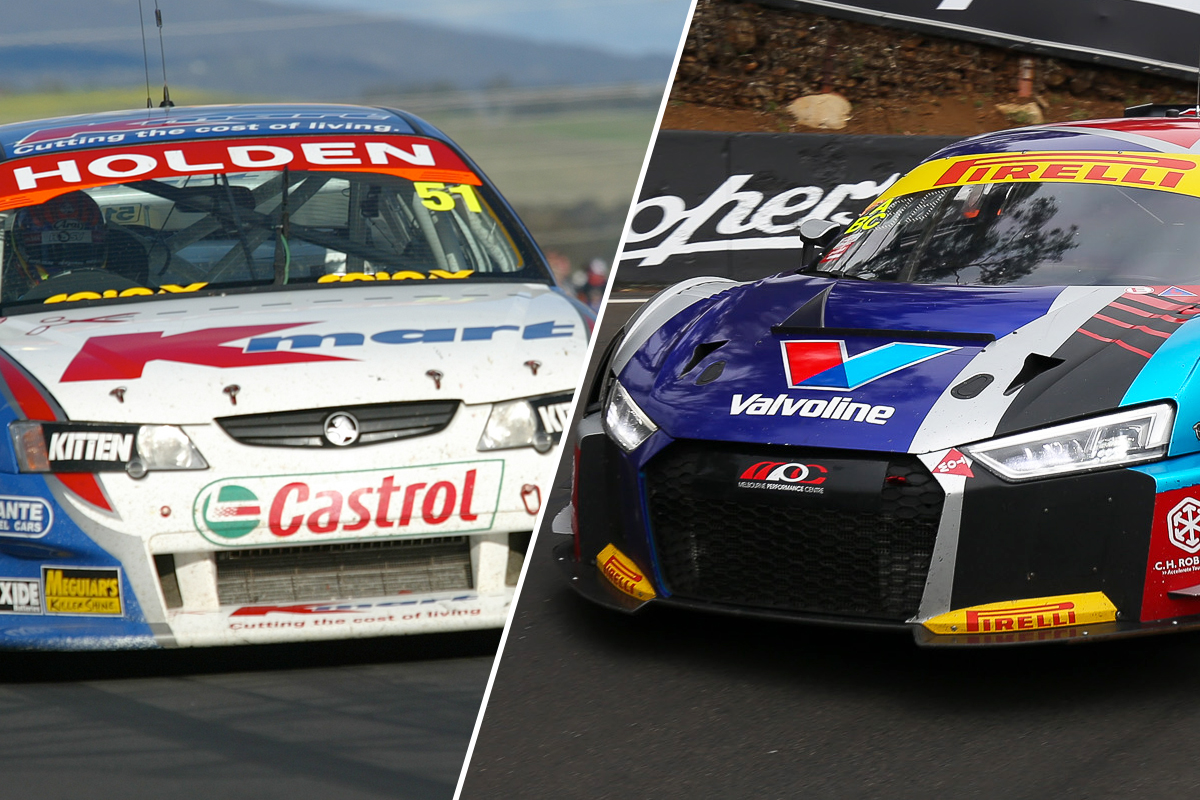 He did so in an Audi Sport Customer Racing R8 GT3 engineered by the same man who was behind Greg Murphy’s famous 2003 Lap of the Gods; Erik Pender.

A 2:06.8594s recorded by Murphy to score pole for the Great Race in 2003 remains the circuit’s most legendary lap, having been more than a second quicker than the next best in the session.

Pender worked at Walkinshaw from 1999-2012, before spending two years at Nissan Motorsport and then stepping out of Supercars to work for the Audi squad.

Running a fleet of R8s, the Bathurst 12 Hour is the pinnacle of the team’s season, and last week’s Challenge Bathurst sprint was used as a test for the February 3 race.

The Challenge Bathurst format allows a range of competition cars to take to the track in groups, enjoying 15-20 minute blocks of track time.

Pender says the team was always tempted to remove the car’s Balance of Performance restrictions and have a go at a sub 2-minute time.

“It was in the back of our minds that, if everything went to plan with our program, there might be an opportunity at the end to have a bit of a crack,” Pender told Supercars.com.

“We’ve always wondered how much the restrictions, especially the air restrictors in the engine, actually knock the speed around, particularly going up the hill.

“It was never our priority and if we were still going through the test program we wouldn’t have done it, but the testing went so well, with surprisingly few red flags, that we gave it a blast.

“We were doing it to go under two minutes, that was the aim – everyone wanted to see that magic ‘four-minute mile’ number, but by how much we weren’t sure.” 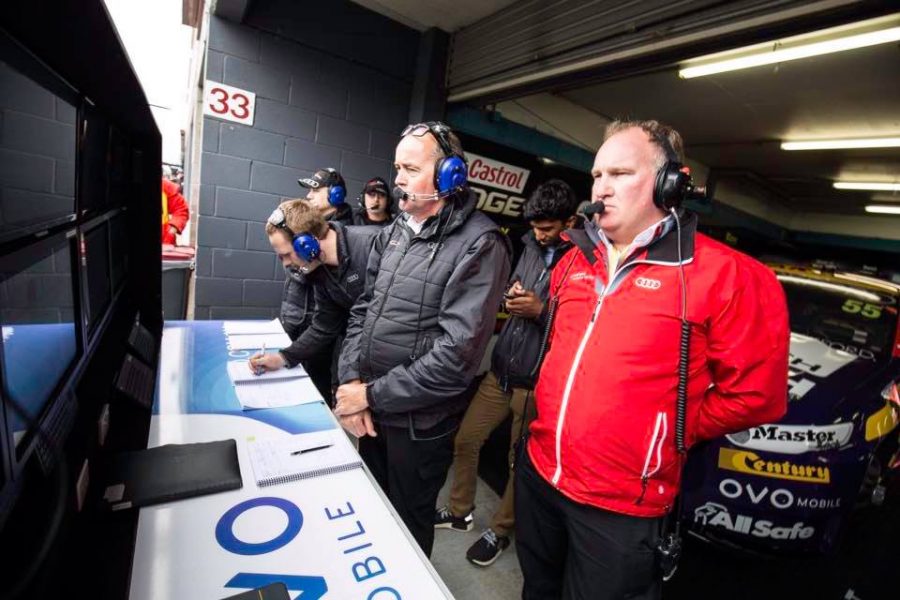 The removal of the BOP measures gave the car around 100bhp more than it usually races with, meaning it gained “five tenths up and down the straights, easy”.

“Everyone is saying it’s an illegal car, but it’s not really,” stressed Pender.

“The car was still built as homologated, then the SRO (global GT3 racing promoter) decide to make the cars equivalent with weight, air restrictors and minimum ride height.

“The only thing we did was take some weight out, not all of it, but the bits that were easy to pull out, so about 40 kilograms, and take the [39mm] air restrictors out.

“That gave it about 100bhp more, so still a bit short of a Supercar power output, but basically the output is the same as a standard R8 V10 now, about 560bhp.

"It was in the rev-limiter for a long time on Conrod, which we don't normally get [with the Audi].

"That reminded me of Murph’s lap, although Murph was going even faster, because that car was geared to about 296 (rather than 291)." 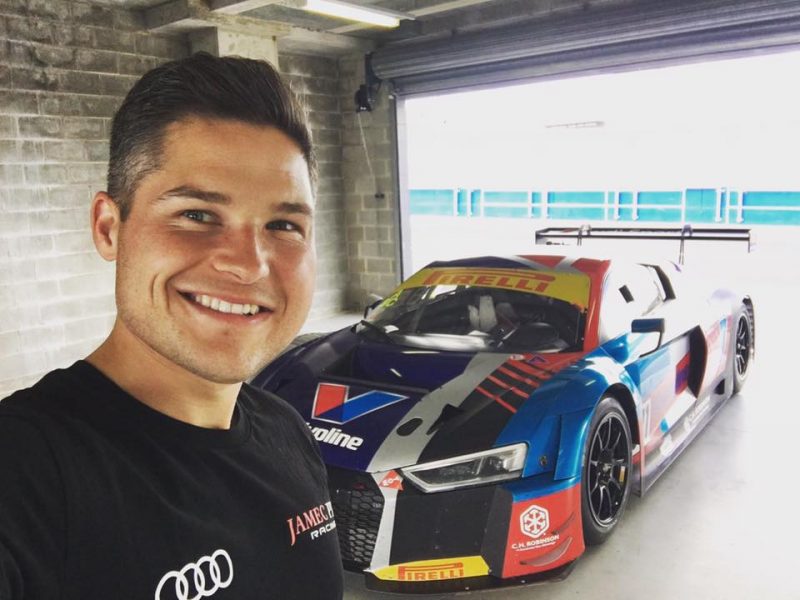 Mies posing with the car after his run

Regardless of the specifications, Mies – a regular in Audi's 12 Hour line-up – had to go out and do the time and, according to Pender, the conditions were not ideal.

“In the run before a car had dumped oil all over the circuit, Chris went out and it was sliding around and he was on the radio saying ‘there’s too much oil’,” Pender recounted.

“He ran off at Turn 1 on the oil on one of the first laps, then tried to have a go but got traffic, and then the seas parted for him in the last couple of minutes.

“He finished the lap as the chequered flag came out, so it was then or never and he managed to put it all together, despite the oil and passing a car.

“We were fortunate that cloud cover came over just for that run, so the UV was down but the track temp was up, which didn’t match the tyre that well.

“That’s why I think you could definitely go faster, if you have the right tyre and all that.” 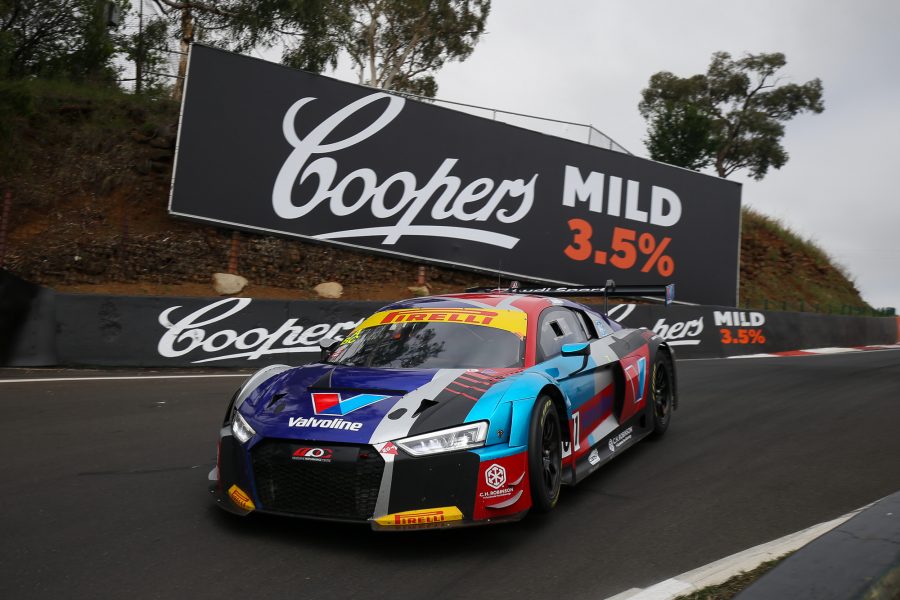 The Audi plunging through The Dipper

Mies said after the lap that “in the morning and [with] no traffic I’m very sure I could have done a 1:56”.

Pender agrees there was more in it, but how much is up for debate.

“We thought afterwards, on the right rubber for the time of day and a clean track, you’d definitely do a '58,” he said.

“Murphy’s lap stood for a long time and it’s nowhere now. It’s still special because of when it was done, but Scotty (McLaughlin, 2017) was three seconds faster. That's a fair old step.”

Garth Tander, another Audi 12 Hour stalwart, shared the car with Mies at Challenge Bathurst, and also had a late run at the record.

He was, however, on Bathurst 12 Hour race tyres, rather than the slightly softer compound rubber Mies had run, which was a fresh set left over from this year’s Australian GT campaign.

Couple of days at Bathurst in this beast! Was cool to get some laps in ahead of next years @bathurst12hr.

“We could have given Garth a few more laps prior, but we knew we needed a bit of time to change the car and make sure it was right, so we sacrificed that prior run for Garth.

“It was only down to 15-minute sessions in the end unfortunately, but he got some clear laps in, which was good.”

Because Challenge Bathurst is a CAMS Speed event and an official Supersprint competition, Mies’ time counts as a new outright lap record for Mount Panorama.

Noting that his Audi was doing 2:02s last week during its BOP-restricted laps, Pender feels a high 2:00s or low 2:01s could be on at next year’s 12 Hour, provided conditions are right.

While Pender has moved on from Supercars, he’s forever linked with Murphy’s Lap of the Gods, which he recalls as one of his finest memories with the Holden team.

“When it pops up around Bathurst time, some of the kids watch it and suddenly realise I’m on that video and have the ‘is that you?’ moment,” he said of the lap.

“There’s lots of good memories from over the years, sometimes even when things haven’t gone well, but that’s one where you remember everything so clearly in your mind.

“The whole focus was winning on Sunday. The car was strong, it was between us and John Bowe in the Brad Jones car, but until Murph did the lap we thought we’d be second.

“We hardly changed the car through the weekend, they were really happy with it and he was on another level.

“We put the race engine in before the Shootout because we wanted to do everything during the day and have an early night and be fresh for Sunday.

“After the lap Rob (Crawford, team manager) got us together and said ‘enjoy it for five minutes, but then it’s back onto the plan, there’s a big day tomorrow to get through’.”

While Murphy was able to back up his sizzling lap by winning the 1000 the next day with Rick Kelly, Mies will have to wait until February 3 to finish the job in the 2019 Liqui-Moly Bathurst 12 Hour.

Related Content
VIDEO: 1:59s Bathurst lap record onboard  ›
17/11/2018
1:59s record set in Bathurst 12 Hour testing  ›
16/11/2018
Stay In The Know
Sign up to the Repco Supercars Championship Newsletter
We use cookies to ensure we give you the best experience on our website. If you continue to use this site, you agree to the terms and conditions identified in our privacy policyOKPrivacy policy