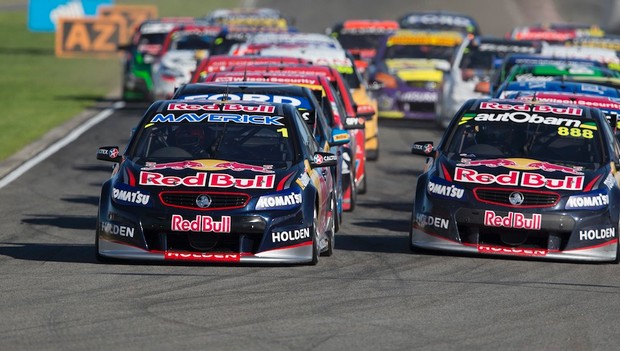 1. SupercheapAuto Racing’s Russell Ingall won the inaugural V8 Supercar event at HiddenValley back in 1998, so it’s perhaps appropriate he racks up an importantcareer milestone in Darwin.

Ingall will start his 225th Australian Touring Car Championship/V8 SupercarsChampionship event in the Northern Territory, drawing him level with Hall ofFamer John Bowe for the record of most starts in ATCC/V8SC history.

The 2005 V8 Supercar Champion, Ingall has competed in a total of 521 racesacross 224 events, claiming 27 race wins, 38 podiums and a single poleposition.

Ingall is one of three drivers – along with Garth Tander and Craig Lowndes – tohave competed in every Hidden Valley event.

Bowe will be present in Darwin to see Ingall equal his record. The 1995Australian Touring Car Champion will be competing in the Touring Car Masterscategory in his Ford Mustang.

2. Whilethe start of the 2013 season was highlighted by seven different winners fromthe first eight races, there’s no doubt Red Bull Racing Australia is up tospeed and back into winning stride.

The team has won six of the last seven races with reigning Champion JamieWhincup claiming five of them to bring his season tally to six.

Lockwood Racing’s Fabian Coulthard is the next best for the season with threewins from Team BOC’s Jason Bright and Craig Lowndes, each on two.

Whincup is also early favourite for the ARMOR ALL Pole Position Award as he’sclaimed 50 percent of the available pole positions this year – eight from 16. He’s not qualified outside the top five all season and has started on the frontrow for eight of the last nine races.

3. The SKYCITY Triple Crown at Hidden Valley returns to a three-race formatthis year for the first time since 2008.

No driver has been able to claim the Triple Crown trophy since it wasintroduced to the Darwin event in 2006.

In the last four years (2009-2012) it has been on offer to a driver if theycould be fastest in the Top 10 Shootout and win the pair of races. However, nodriver has claimed the Triple Crown over the last seven years it has been onoffer and it remains one of the most elusive awards in the V8 SupercarsChampionship.

With therevised format, this year the Triple Crown trophy will be awarded if a drivercan win all three of the weekend’s races.

Of those, Ford Performance Racing has taken five (three to Mark Winterbottomand two to Will Davison), but only been able to convert those five poles intojust one race win (Winterbottom, Saturday 2010).

The other Ford pole position was taken by Alex Davison, who claimed his first –and so far only – V8 Supercar pole in Darwin on Sunday in 2010 for StoneBrothers Racing. Davison is now part of the four-car line-up run by FPR driving the #18 JELD-WENFPR Falcon.

5. Beating your teammate is the first task of any V8 Supercar driver and thehead-to-head qualifying numbers in 2013 show that, generally, it’s a lop-sidedfight so far in most teams.

The biggest ‘win’ so far has been Jamie Whincup over Craig Lowndes – 13-3 inthe Champion’s favour.

Fabian Coulthard has dominated BJR teammates Jason Bright and David Wall(11-5-0), while Mark Winterbottom is on top of Will Davison at the Pepsi MaxCrew in qualifying (12-4), despite trailing his teammate by five positions and143 points in the actual Championship. Winterbottom is the only driver that has out-qualified his teammate overall thisyear over 16 races but sits behind him in the Championship pointscore.

Scott McLaughlin has the upper-hand at Fujitsu Racing GRM over Alex Premat(10-6), while Shane van Gisbergen has out-paced Tekno Autosports teammateJonathon Webb to the score of 11-5.

Rick Kelly has dominated brother Todd 11-5 while Norton Nissan pilot JamesMoffat has the same stat against his stable mate Michael Caruso.
However across all four Nisan Motorsport pilots, Rick leads the way 7-5-3-1over Moffat, Todd and Caruso.

Lee Holdsworth has been the ‘form’ qualifier at Erebus Motorsport V8 (11-3-2against Tim Slade and Maro Engel), while Chaz Mostert’s arrival of Dick JohnsonRacing has blown Tim Blanchard away given the new comer has out-qualified thelatter for all seven races so far as teammates.
Scott Pye leads Dean Fiore 7-5 at Lucas Dumbrell Motorsport given Pye missedthe Pukekohe event.

The most evenly matched team has been the Holden Racing Team with Garth Tanderand James Courtney 8-8 so far. Their Walkinshaw Racing stable mate RussellIngall has out-qualified the ‘red’ pair on just one occasion this year.

6. The soft Dunlop tyre and the 60/60 Super Sprint format will make a return tothe V8 Supercars Championship in Darwin after neither was used in the lastevent in Austin, Texas.

Each driver will have eight soft and 12 hard Dunlop tyres to use acrossqualifying and the three races at Hidden Valley.

During the 60/60 Super Sprinton Saturday (Race 17 of the 2013 V8 Supercars Championship), which will be madeup of two halves each of 21 laps, drivers will only be permitted to use the hard tyre.

Drivers will have to use both soft and hard tyres in Race 18 on Sunday and thenagain in Race 19 later that afternoon. Each Sunday race will be 35 laps induration.

7. This year is the 16th time the ATCC/V8 Supercars Championship hasvisited Hidden Valley since the first event back in 1998.

In that time there has been a total of 41 races held with Holden claiming 28 toFord’s 13, though the last 14 races (since 2007) have been split evenly – sevenapiece.

This year is the first time Nissan and Mercedes-Benz AMGs will have competed atHidden Valley given the circuit didn’t appear on the calendar until after theV8 Supercar era of the Championship commenced in the late 1990s and theinternational Group A category had disappeared.

8. Droughts are bad news for farmers and they are just as bad for V8 Supercarteams that have gone without a win for a while.

At present, the longest drought for a team in the Championship (that haspreviously won a race) sits with Dick Johnson Racing – 75 races have come andgone since their last race win at Sydney in 2010 with Jonathon Webb (who ranthe team’s third car that season).

There have been 62 races since Erebus Motorsport V8 – formerly known as StoneBrothers Racing – took victory (the last in Darwin in 2011 with Shane vanGisbergen), while the Holden Racing Team is winless over the last 54 Championship races since Bathurst 2011.

Of those, Pyeand Mostert competed at Hidden Valley in Formula Ford in 2009, finishing fourthand fifth respectively for the round.

Blanchard competed in the V8 Ute Series in Darwin in 2011 driving the Auto OneWildcard entry, finishing 14th overall in a field of 32.

10. The likelihood of the Pedders STP Chrysler Safety Car making an appearanceat Hidden Valley has soared in recent years.

46.3 percent of all V8Supercars Championship races in Darwin since 1998 have seen the Safety Caron-track at some stage. However, since 2007, Safety Cars have appeared in 71.4 percent of V8 Supercarraces at Hidden Valley – a marked increase.

Since 2001 there has only been one event – 2010 – where the Safety Car was notcalled upon in any of the races over the weekend.

The SKYCITY Triple Crown runs from June 14-16 at Hidden Valley Raceway in Darwin, with tickets through Ticketek.

10/06/2013
Related Content
2013 SKYCITY Triple Crown  ›
Stay In The Know
Sign up to the Virgin Australia Supercars Championship Newsletter
We use cookies to ensure that we give you the best experience on our website. If you continue to use this site we will assume that you are happy with it.Ok