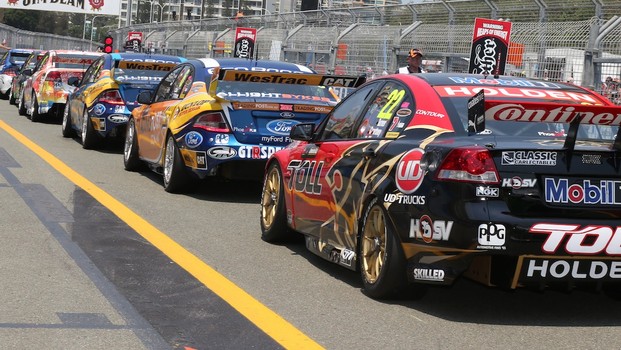 1. Supercheap Auto Bathurst 1000 winner Mark Winterbottom is the form man of the V8 Supercars Championship – and not simply because he clinched victory at Mount Panorama nearly a fortnight ago.

The Ford star has out-scored all other drivers across the Townsville, Queensland Raceway, Winton, Sandown and Bathurst events, slicing 202 points away from title leader Jamie Whincup in the process. Winterbottom has scored 1202 points across the last five events to Whincup’s 1000.

‘Frosty’ has great form on the Gold Coast too, having finished on the podium in seven of the last eight races at Surfers Paradise, including two victories.

2. This year is the 23rd year of the annual Gold Coast street race, which first was held as an IndyCar event back in 1991. This weekend will be the 19th time V8 Supercars have competed there (1994 and from 1996 onwards) and 2013 is the 12th time the event has been held for Championship points as part of the V8 Supercars Championship.

It’s the fourth straight year the ‘600’ race format – featuring a pair of 102-lap races with two drivers in each car – has been held, though it’s the first time that having an international co-driver is not compulsory for each team.

The winner of the last IndyCar race on the Gold Coast – Ryan Briscoe in 2008 – is making his fourth straight appearance this year in a V8 Supercar at the event.

3. Jamie Whincup holds a 114 point Championship lead over teammate Craig Lowndes heading into the ARMOR ALL Gold Coast 600 and will rack up his 300th V8 Supercars Championship race start in the Sunday race.

The Red Bull Racing Australia driver has a brilliant record at his adopted home event, claiming three wins from the last five races. The four-time Champion has taken the last four ARMOR ALL Pole Positions in a row on the Gold Coast and been the top point-scorer for the last two Gold Coast events in 2011 and 2012.

4. Whincup and co-driver Paul Dumbrell lead the race for the inaugural PIRTEK Enduro Cup, which will be awarded for the first time to the duo that scores the most points across the Wilson Security Sandown 500, Supercheap Auto Bathurst 1000 and ARMOR ALL Gold Coast 600. Whincup and Dumbrell hold a 42-point lead over Red Bull teammates Craig Lowndes and Warren Luff with 576 points to 534.

Fourth place at Sandown and 14th at Bathurst have helped Erebus duo Lee Holdsworth and Craig Baird to fifth place in the #4 IRWIN Mercedes-Benz AMG E63.

A total of 300 points remain up for grabs in the PIRTEK Enduro Cup on the Gold Coast.

Vote on who you think will win the PIRTEK Enduro Cup.

5. There are 12 drivers in this year’s ARMOR ALL Gold Coast 600 field making their first appearance in a V8 Supercar on the streets of Surfers Paradise. Of them, only Maro Engel, Scott McLaughlin, Alex Premat and Matt Halliday are yet to race in any category at the event.

6. Craig Lowndes racks up an important milestone on the Gold Coast, where he will make his 220th Australian Touring Car Championship/V8 Supercars Championship event start.

That ties the three-time Champion with Mark Skaife for third on the all-time list behind Russell Ingall (230) and John Bowe (225).

7. There are a range of co-drivers on the Gold Coast that will have a good excuse for being a little rusty given they have not raced V8 Supercars at the Surfers Paradise street circuit for quite some time.

Kiwi Craig Baird, who will be aiming for a record fifth Porsche Carrera Cup title on the Gold Coast in addition to duties in the #4 IRWIN Erebus entry, last raced a V8 Supercar at the circuit back in 2005 for WPS Racing.

The Bottle-O FPR Ford co-driver Dean Canto last raced a V8 Supercar on the Gold Coast in 2007, while Scott Pye’s partner Paul Morris last lined up back in 2008 – his final season as a full-time driver.

8. Officials would be wise to leave the engine running in the STP Pedders Chrysler Safety Car on the Gold Coast, with just three of the last 26 V8 Supercar races at the circuit running from start to finish without a Safety Car since the event became part of the Championship in 2002.

The last race completed without a Safety Car was Race Two in 2007, however the introduction of the 600 race format from 2010 onwards – and of course the increased distance in each race that has come with it – has seen an average of 3.8 Safety Car periods per race in that time.

9. The finishing rate on the streets of the Gold Coast is also an important statistic in telling the story of the event.

Since it became a part of the V8 Supercars Championship in 2002, 86 per cent of cars have finished the races. However, that has dropped to 76 per cent over the last three years in the wake of the introduction of the 600 format and the added elements of increased distance and co-drivers involvement.

No Gold Coast V8 Supercar race, whether part of the Championship or not, has ever seen a full field start and finish.

10. A total of five nationalities will be represented at this year’s ARMOR ALL Gold Coast 600. Naturally the field is packed with Australians and New Zealanders, though the Netherlands (Jeroen Bleekemolen), Germany (Maro Engel and Marc Lieb) and France (Alex Premat) are also represented.

There are two Australian internationals – Ryan Briscoe and David Brabham – who are based in the United States and England respectively among the entry list, though both proudly represent Australia on the world stage.

Tickets are still available for this week’s ARMOR ALL Gold Coast 600 or for those watching at home, click here for the TV schedule or vewing on live, uninterrupted stream V8 SuperView.