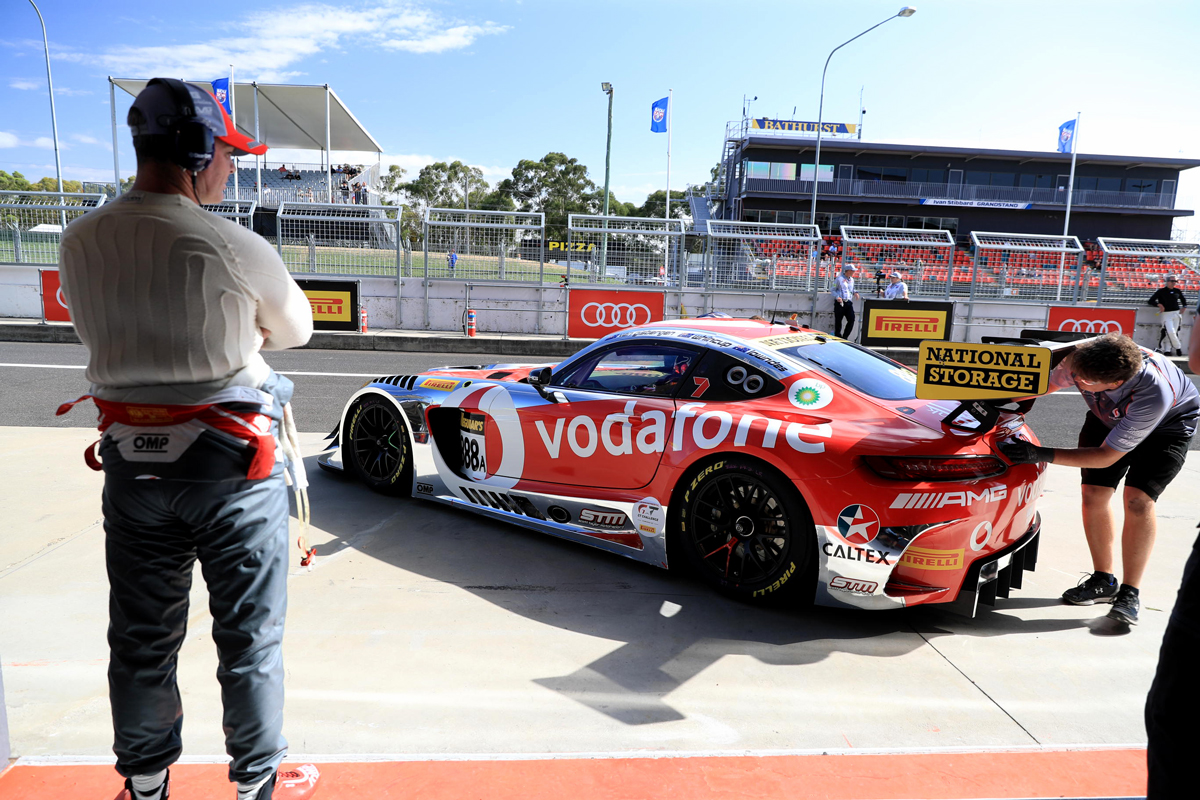 It was billed as the ultimate Bathurst 12 Hour dream team.

In reality much of it played out like a nightmare, with practice incidents, a struggle for speed, brake dramas, cooling trouble and a mid-race penalty all plaguing the much-hyped entry.

And yet somehow, they ended up with a fourth-placed finish, just 0.2 seconds shy of the podium.

Supercars.com takes a closer look at how the squad’s dramatic 12 Hour campaign unfolded. 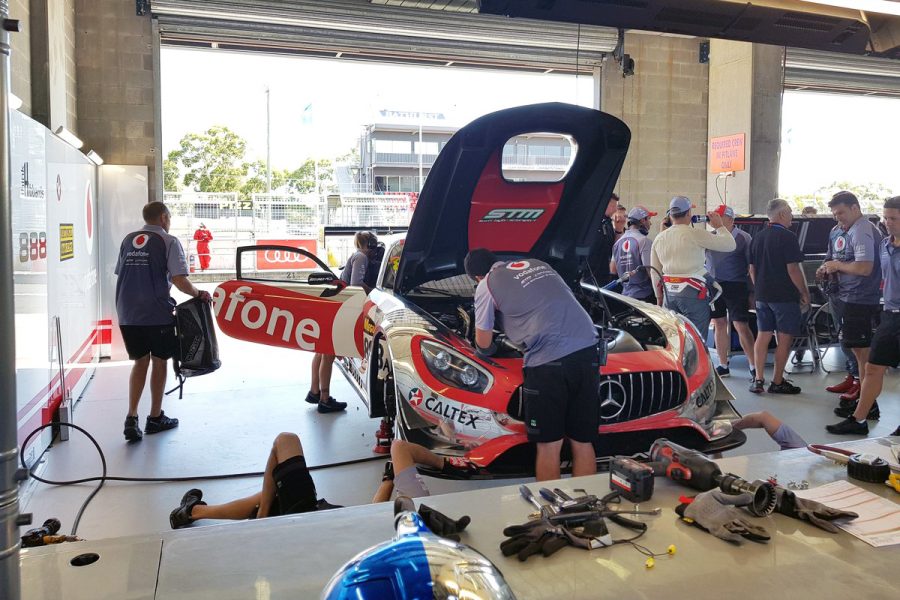 The drama began in the very first full-field practice session, where van Gisbergen tangled with the Spirit of Race Ferrari, driven by Am competitor Paul Dalla Lana.

Nose-to-tail contact sent the Ferrari hard into the concrete on the right on the run to Murray’s Corner, as well as bending the front of the Mercedes.

Van Gisbergen stopped to check on the Canadian, who was letter penalised for the clash, before returning to pitlane for the team to affect repairs.

“He was trying to go one way and I was going the other, he didn’t see me and all of a sudden he braked,” van Gisbergen surmised of the incident.

It was an inauspicious start.

The bigger problem on Friday was a struggle for speed; the drivers complaining of understeer in the slow corners and oversteer across the top.

Unseen by TV cameras, Whincup tagged the wall at Griffins’ Bend in the final Friday session, which the car finished just 17th fastest.

With the GruppeM Mercedes topping Friday, some 1.1s ahead of the Vodafone car, Whincup described Triple Eight as “a fish out of water” in the GT paddock.

Van Gisbergen gave some hope with the eighth-fastest time late in Saturday’s final practice, but Whincup could only manage 19th in the afternoon’s qualifying.

“I was pushing as hard as I could, having heaps of moments, on the limit, but the time just wasn’t there,” he said, adding they'd need a miracle to be on the front-running pace in the race. 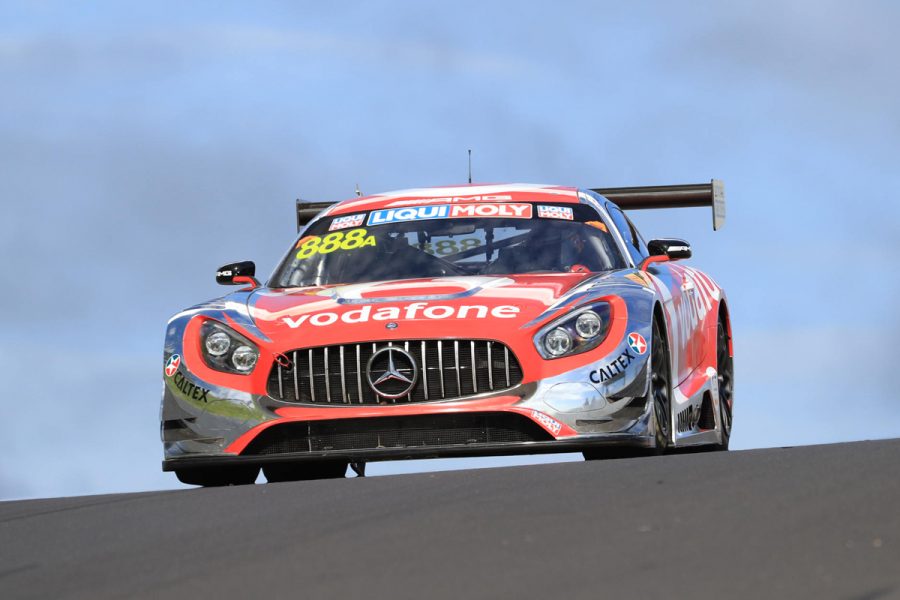 Handling balance wasn’t the only reason the team struggled for speed in practice and qualifying.

Van Gisbergen and Lowndes both had minor offs during their opening stints in the race, with the latter then revealing they’d also been battling braking dramas.

“We’ve changed everything in the car, the ABS system, the whole lot, but we can’t do any more, we’ve just got to race with what we’ve got,” Lowndes said after his first stint.

Team manager Mark Dutton added post-race that even the help of engineers from AMG and HWA could not resolve the mysterious problem prior to the race.

“To reiterate that we had a brake drama we were comparing data against other people and could see we had issues, just couldn’t seem to solve it,” he said.

“The guys pushed through them for the majority of the race, but it was disappointing we couldn’t get to the bottom of that.” 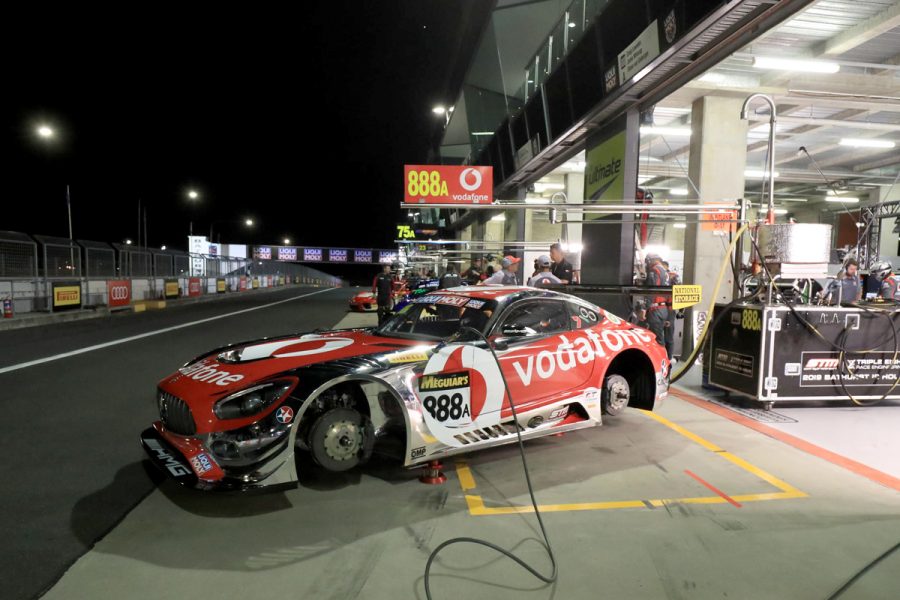 The brake problem compounded what appeared an even bigger issue as the drivers were getting out of the car severely overheated.

Lowndes was visibly distressed following his first run – his customary smile well and truly absent as he charged out of the back of the garage, looking for respite.

“We opted not to use a coolsuit,” Lowndes explained, after bailing out of a planned double-stint ahead of schedule.

“We had the forced air coming into our helmets, but we thought the temperature wasn’t going to creep up so quickly, and of course it did.”

While the early trouble meant the team adopted coolsuits for the rest of the race, a lack of airflow almost proved too much for Whincup and van Gisbergen in the latter stages.

“The fan failed,” said Whincup. “You massively rely on the fan to keep the cabin temperature down, and when that fails, there’s no back-up.

“There’s no window, there’s no other vent, there’s no air whatsoever. It was hotter than any racecar I’ve ever experienced.

“The coolsuit was a saving grace in some ways, but it was still 70 degrees or so in the cabin, is my guess.” 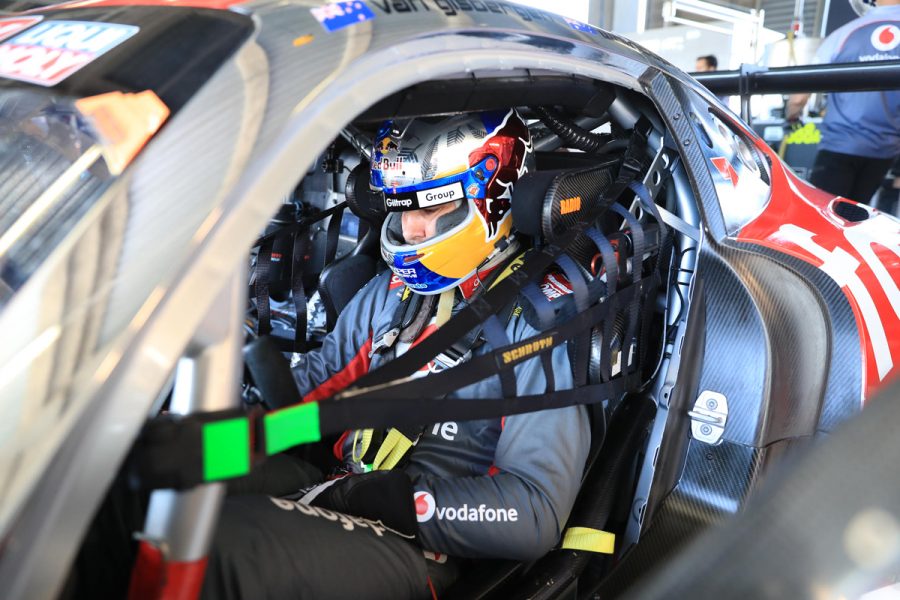 Amid the brake and cooling dramas, the team was thrown an extra curveball in the fifth hour when Whincup was penalised for passing under Safety Car.

Whincup had been stuck behind two cars that elected against overtaking, despite the Safety Car having its green light on, signalling them go through.

Upon seeing a black flag, Whincup later said he was “screaming to the guys in the pits” to fight the penalty, which after a review, was eventually rescinded.

Whincup later admitted it was a déjà vu moment, having suffered what he thought were unjust penalties in the Bathurst 1000 in 2015 and ’16; the former for passing the Safety Car.

Serving a penalty in the 12 Hour would have dropped the car from the lead lap, almost certainly ending hopes of a strong result.

The early dramas and a long period of green flag running meant van Gisbergen was almost a minute adrift of the leader when he returned to the car with two hours remaining.

What they needed was a Safety Car and, 30 minutes from home, they finally got one – triggering van Gisbergen into the pits for green tyres.

It dropped him from fifth to seventh, before a thrilling charge to the flag netted fourth, just 0.2s from the podium.

“The car got better and better throughout the day,” van Gisbergen later said.

“It was really bad at the start and really uncomfortable, but the track rubbered in and came to us.

“I didn’t drive from the morning until the end, and the guys were getting more and more positive about the car, expect for the brakes.

“[The last stop for tyres] was definitely worth the gamble and I had some pretty cool battles on the way through, but it was hard to pass those ‘big motor’ things.” 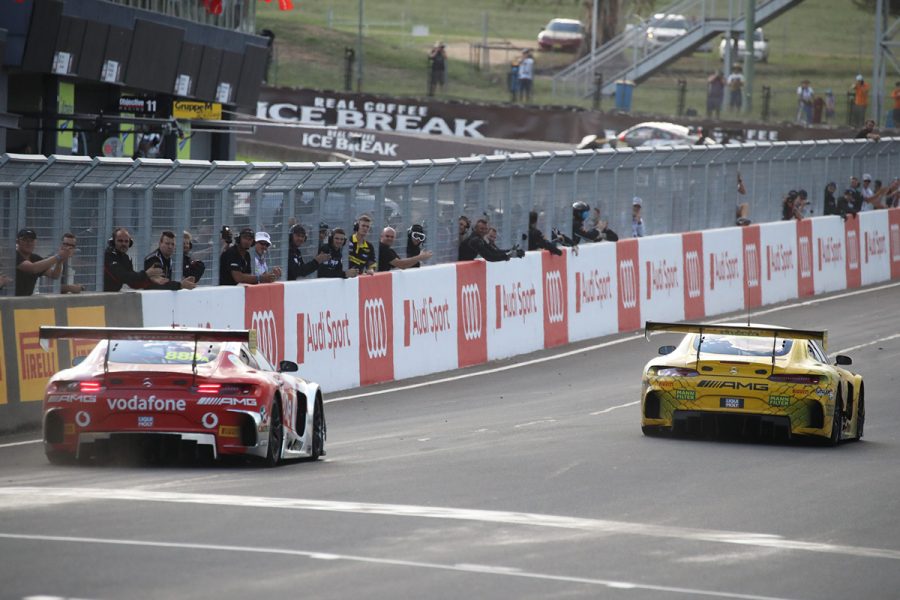 The most dramatic moment of all came after the flag, when van Gisbergen collapsed in parc ferme after stepping out of the vehicle.

He later described it as the result of cramping in his leg from pushing the brake pedal so hard, as well as the sheer heat in the cockpit.

The drivers had taken up the practice of using two feet on the pedal at key points on the circuit, due to the braking issues.

Whincup said the approach was something “any racing driver in the would laugh at”, while van Gisbergen added: “The pedal’s big enough you can fit two feet.

“Not around over the top, but the four big brake zones, you had to be two-feet to get the ABS to work. You just couldn’t push enough pressure.

“I’d never, ever done it before, but I tried it in practice [on Saturday] and that was the only way we could get it to stop.

“This morning it was one foot and it was OK, but my leg just gave up so had to use two.” 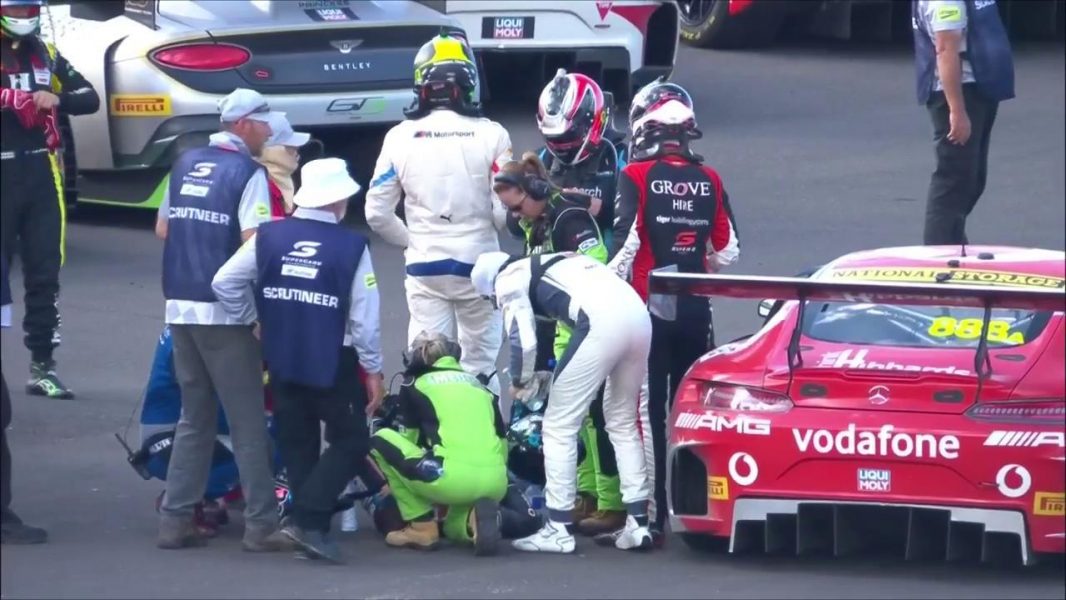 Van Gisbergen’s collapse meant the 12 Hour ended with members of the Triple Eight crew sprinting through the paddock to the aid of their driver in parc ferme.

Among them was Dutton, who later drove the Kiwi back to the team’s pit area in a golf buggy, allowing him to recover in its ice bath.

“You can’t deny that he gives his all," surmised Dutton of van Gisbergen's drive. "He basically flowed out of the car, he was jelly afterwards.”

Van Gisbergen’s late heroics aside, it was a rather un-Triple Eight weekend, with the ongoing brake and driver cooling issues appearing particularly uncharacteristic.

While Dutton denied the team had tried to “re-invent the wheel” compared to the other Mercedes entries, he admitted there were lessons to be learned.

“We have to look, if we’re racing here next year, what to tune up, because you learn from your experiences,” he said.

“We’d probably do a few things differently, as always with the benefit of hindsight, but we felt we went in well prepared."

And as for the performance of the crew, consisting of a mix of Triple Eight and Scott Taylor Motorsport members?

“The crew were awesome, they didn’t put a foot wrong all day and we threw a few curveballs at them,” Dutton said.

“It was pretty cool to have two teams come together like they did. It was good fun. That’s why we’re smiling.”