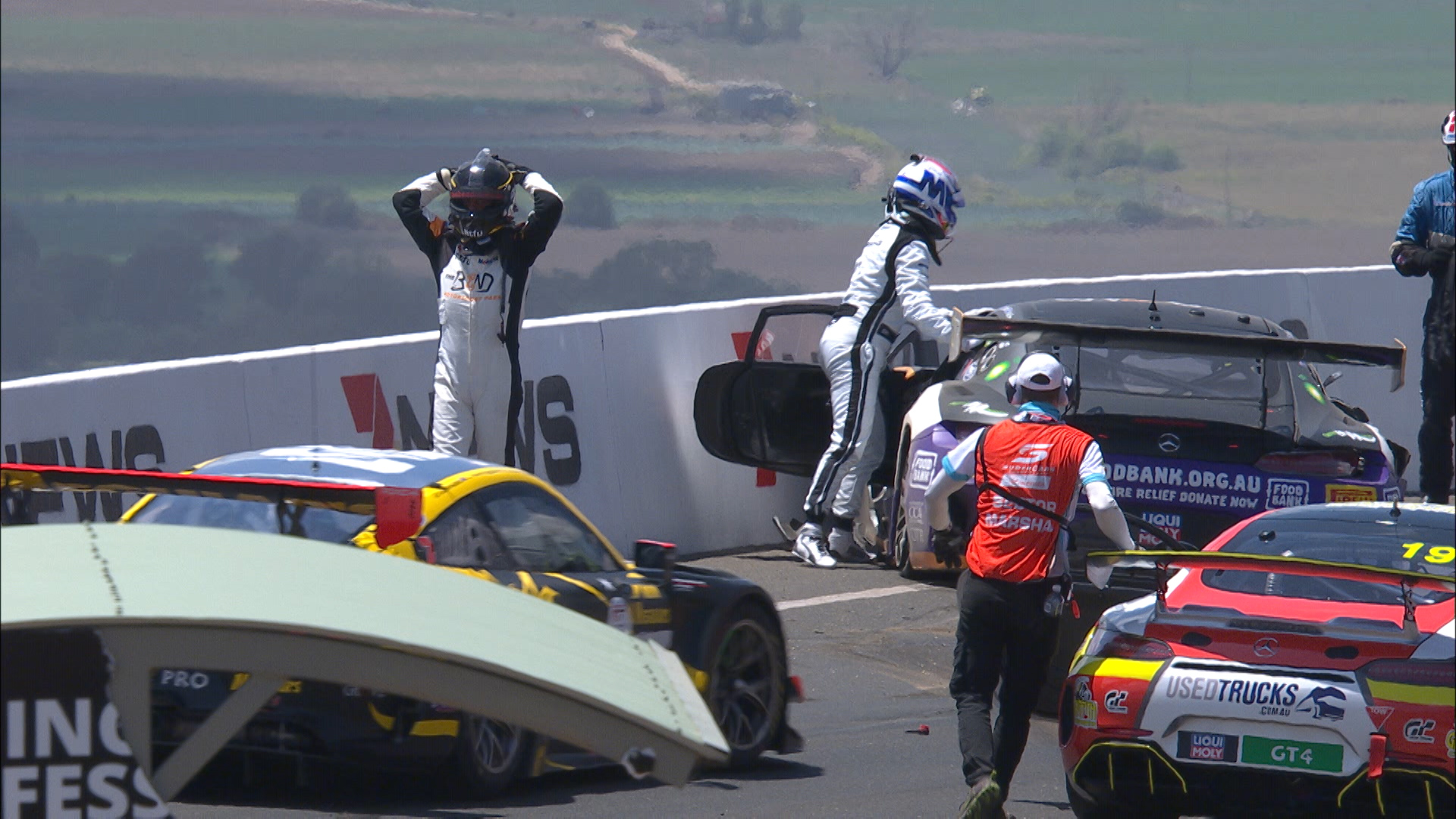 Triple Eight’s Pro-Am entry is in serious doubt for the Liqui-Moly Bathurst 12 Hour after a horror crash in the first segment of qualifying.

The Bend Motorsport Park owner Sam Shahin was onboard the car he’s sharing with Anton De Pasquale, Nick Foster and Yasser Shahin when the incident occurred 30 minutes into the session.

Shahin was tagged from behind by Cameron McConville’s Lamborghini when he slowed at Skyline, punting the Mercedes into the concrete on the right-handside, before coming to rest on the left.

While the following cars of Chaz Mostert and Nick Percat avoided joining the accident amid a cloud of dust, Dunlop Super2 driver Tyler Everingham was not so fortunate.

Everingham’s MARC II clipped Shahin's car before making contact with the right and then leftside concrete at Skyline, ultimately coming to rest in the Esses.

Helped from his car by Mercedes GT4 driver Dirk Muller, Shahin was able to walk away uninjured, while Everingham also got out of his car before being taken to the medical centre with a suspected leg injury.

In the immediate aftermath of the incident, Triple Eight boss Roland Dane was unsure if his car can be repaired, but did not hold back giving his view of the incident.

“No idea what the impact is like to be honest, I’m more concerned with firstly how Sam is right now. He got out of the car, looked to be a bit winded,” he said.

“Then the next thing is the idiot who took him out, McConville, who should’ve retired years ago and that shows it.”

Also speaking to the television broadcast, McConville was apologetic over the incident.

“I feel sorry for Sam, he’s a great guy, honestly didn’t mean to touch him,” he said.

“I went to go under at The Grate, I had my flashes on and he turned across, so I got out of it, didn’t want to make contact.

“Then we came out of Skyline and as I went left to pass him he just hit the brakes.

“I feel absolutely terrible for those guys, I feel sick in my stomach and I didn’t mean to touch him. Just that little dab of the brakes.”

The incident required officials to red flag qualifying for 20 minutes, which followed an earlier red flag when the #2 Audi hit the tyre wall at the same part of the circuit with Frederic Vervisch at the wheel.