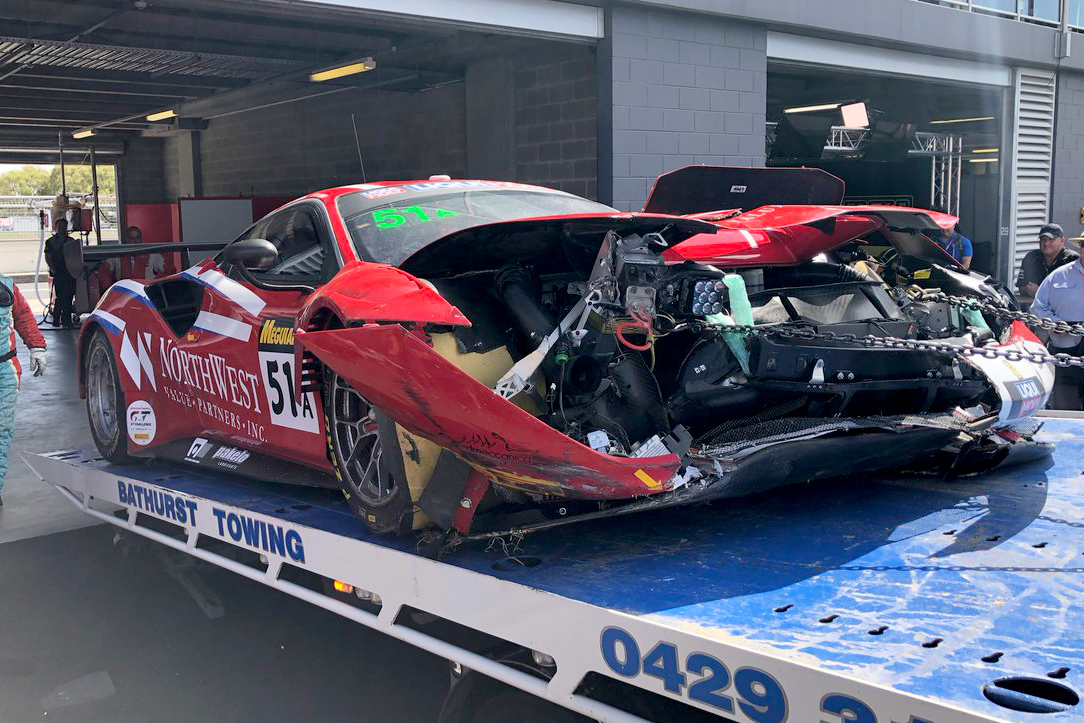 Ferrari driver Paul Dalla Lana has been penalised following a run-in with Supercars champion Shane van Gisbergen in practice at the Bathurst 12 Hour.

The #51 Ferrari was punted hard into the concrete wall at the exit of The Chase in the closing stages of Practice 2 after the Canadian braked in-front of the Vodafone Mercedes driver.

With the Spirit of Race Ferrari team having spent the day repairing their car ahead of a return to action on Saturday, the entry has been levied a 10-place grid penalty for "careless driving".

The stewards’ explanation read: “The driver of Car #51 was found to be predominately responsible in causing the contact when Car #51 changed direction and moved to the right on the straight when Car #888 which had been following Car #51 for a significant distance, maintained the tighter exit line on the right from Turn 22.5 to overtake Car #51.”

Van Gisbergen stopped the Mercedes on the circuit immediately after the incident to check on Dalla Lana, before driving back to the garage.

The Team Vodafone AMG only suffered minor front-end damage, despite a wild half-spin through the grass, and rejoined the track for the start of Practice 3.

Van Gisbergen described the crash as a “misunderstanding” with the 53-year-old real estate magnate, who has extensive racing experience.

“He was trying to go one way and I was going the other, he didn’t see me and all of a sudden they braked,” said van Gisbergen.

“He’s experienced, he’s raced quite a lot, but this track is so daunting, he was just trying to get up to speed I think.

“When you’re doing that and you’re hanging on it’s hard to focus on your surroundings, and his awareness of me wasn’t that high.

“He’s an experienced driver and I’ve raced him a lot of times before, he’s always pretty good. It’s just a shame it happened.”

Despite the incident, van Gisbergen ended the session sixth and clocked further laps at the start of Practice 3, before handing over to Jamie Whincup.

Van Gisbergen then left Whincup and Craig Lowndes to the driving duties in Practice 4, instead spectating at the top of the Mountain.

The Mercedes ended up just 17th in the final session, having lost 13 minutes after Whincup clipped the wall exiting The Cutting in the early going.