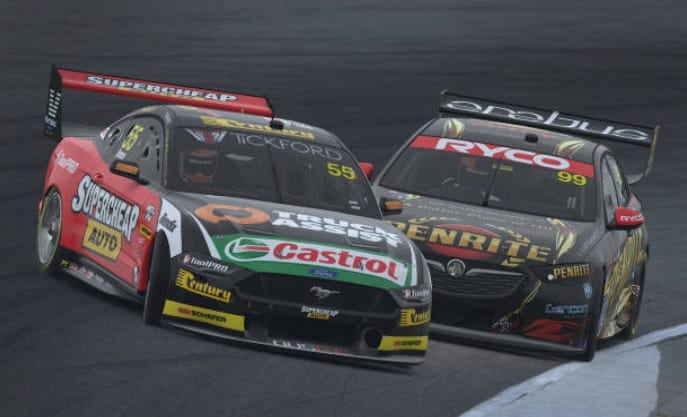 The opening round of the BP Supercars All Stars Eseries was hailed a resounding success from fans and drivers alike, recording impressive ratings as Supercars stars joined the virtual world.

Over 158,000 people tuned in to watch some or all of the live broadcast on Fox Sports 506. An average audience of 70,000 people watched the newly launched series, peaking at 103,000 people over the course of the two hour live show, making it the fifth-most watched show on Subscription TV and the only Fox Sports product in the top-20 shows.

Hosted by the suite of regular on-track Supercars commentators, all 25 drivers showed off their home set ups as they took to the first three races of the Series from the comfort of their own living rooms. After round one, Scott McLaughlin holds the BP Supercars All Stars Eseries championship lead after an action packed opening round which saw McLaughlin win both the first and third races. After some controversy involving a shunt from Anton de Pasquale which gave him a 30 second penalty and relegated him to 13th place from an initial win, Jack Le Brocq took victory in the second race held at Phillip Island.

Supercars CEO Sean Seamer said the numbers show a great response to the opening round of the BP All Stars Eseries.

“Round 1 is as a great first start and rewards the effort everyone has made to get this Eseries up and running,” Seamer said.

“We’re unique in our ability to provide much needed entertainment to everyone in Australia while we await a return to real world racing.

“Having all of our drivers join our commentary team made for a brilliant experience and it was great to see both new and existing fans tuned in to watch the action.

“The feedback from fans has been overwhelmingly positive and we look forward to next week’s second round, where we will race on two of the world’s most iconic circuits; Silverstone and Barcelona.

“We hope everyone continues to enjoy watching our drivers provide the best real time entertainment on TV right now.”

The live broadcast numbers were bolstered by online platforms, where 210,736 viewers tuned in to the live free online broadcast from around the world. 10 Play and Kayo are yet to report their own broadcast figures.

The second round of the BP Supercars All Stars Eseries will begin at 7pm AEST on Wednesday 15th April.