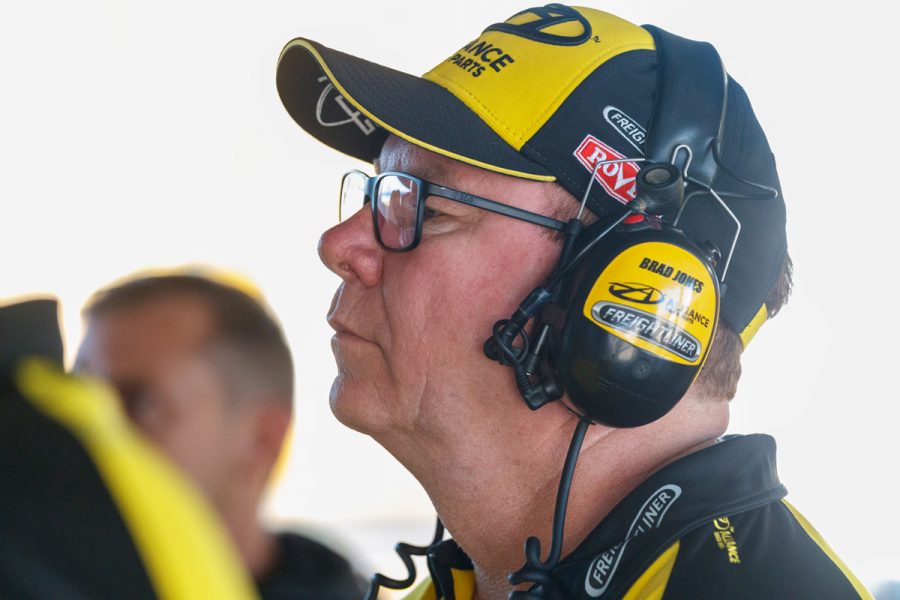 WATCH: BRAD JONES TACKLES A SIM FOR THE FIRST TIME

It comes as the latter prepares to take part in Supercars’ celebrity Eseries race next Monday night, for which 18 competitors have been confirmed thus far.

Jones Sr enjoyed a top-level driving career spanning the best part of three decades until his retirement from Supercars co-driving in 2009.

Now 60 years of age, he is better known as the figurehead of Brad Jones Racing, which fields four cars in the Virgin Australia Supercars Championship.

His son Macauley has taken over the family’s driving reins, competing in his second main game season in the Team CoolDrive entry.

In the comical video, Macauley talks Brad through an online session – often in vain – at Bathurst, where the celebrity race will be held at. Brad took six outright Bathurst 1000 podiums in real-life.

Struggling to get to grips with his first drive of a sim, Brad is seen crashing the car on multiple occasions before insisting he’ll just have “one more” attempt.

The father-son combination share some banter along the way, with Jones Jr regularly bemused by his dad’s lack of caution on outlaps.

“So, best time is a 2:11, so you’re only seven seconds a lap faster than me! Wow, we should share a car sometime,” Brad laughs at one point.

He does manage to get his time down to a 2:09.5 by the end of the session, despite some ribbing from fellow celebrity competitor Neil Crompton along the way.

The celebrity Eseries event will take place on Monday May 18 from 7pm AEST, directly after Supercars SideTracked on Fox Sports 506.

It will also be broadcast live on Sky Sports (NZ) and Supercars’ Facebook, Twitch and YouTube channels.