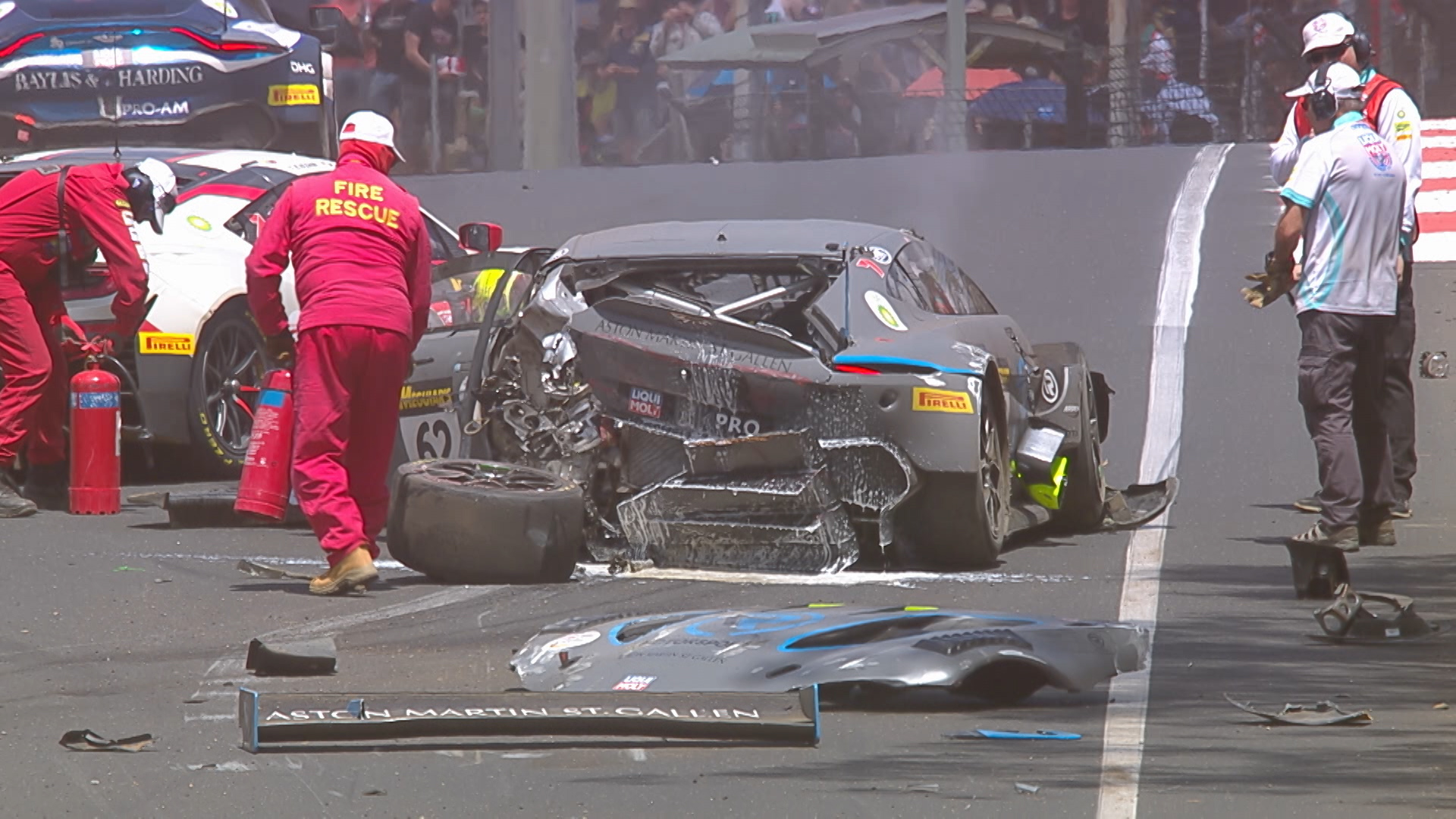 The German came unstuck at the high-speed Sulman Park section in the opening stages of Q2, tagging the wall at the famous ‘grate’, sending the Vantage into a spin.

A heavy second hit against the concrete then flipped the car over, shedding a wheel as it rolled towards McPhillamy Park.

It was one of four session-stopping incidents in qualifying that also included big hits for Sam Shahin (#777 Mercedes), Tyler Everingham (#92 MARC) and Dean Canto (#29 Lamborghini).

Kirchhöfer and Canto were cleared of injury at the trackside medical centre, while Shahin and Everingham were transferred to a local hospital for precautionary checks.

Of the four cars, only the Lamborghini is expected to make the start tomorrow, with the others joining the #35 Nissan and #27 Ferrari on the sidelines.

“Everything was going alright and when I came down the grate I touched the outside wall,” recounted Kirchhöfer.

“I’m not sure if it broke the suspension or blew off the rear tyre, but I couldn’t control the car anymore, I was just a passenger.

“When I hit it backwards I could feel that the front was coming up. I was honestly just holding my head in the car and hoping for it to stop.

“The worst part was I think I landed on the wall and it ripped off the door on my passenger side, so I could see it was going quite bad.

“I was just hoping for it to stop and that no one would collect me in that place, because we’ve seen that before as well. It was quite a big one, by far the biggest one I’ve had.”

“He initially thought I was unconscious because I had my head down, but it was basically me just hoping there was not another impact.”

“I wouldn’t blame it on any weather or track conditions,” he said.

“If there was oil down that’d be an excuse, but I think today it was hard to get into a rhythm because all the sessions were interrupted by red flags.

“But it’s not an excuse. Everyone I think is just pushing to the max and it’s one of the tracks where there’s no place for mistakes.

Supercars co-driver Canto was the last to come unstuck in qualifying, launching his Lamborghini backwards over the tyre barrier at McPhillamy Park.

It eventually came to rest atop the concrete wall in another unusual incident.

“I’m a little bit sore in the upper back… I’ll probably be a bit sorer tomorrow,” he said.

“I think that landing on all fours was quite hard but thankfully I’m still here and the car actually doesn’t look too bad.

“I just feel bad that the boys have got a bit of work to do, but I’m pretty sure we’ll get the car back out there.”